Dropkick Murphys on iTunes.
Keep up with Dropkick Murphys news here. ( I can't always get things posted fast enough, so just go to the source. )
Click for
East Tennessee's most important band!
Awesome Lenoir City, TN based bluegrass band The Holloway Sisters and Outta the Blue:
http://www.facebook.com/OuttaTheBluegrass
Please donate via Paypal and use the links on this site to purchase books, cd's, etc. to support knoxdkm.com and it's webmaster, " Chuck Blackguard."
Please support local ( Sevierville, TN ) band Cutthroat Shamrock. They are a great band whose style is influenced by Celtic music, punk, Appalachian music, and pirates.
They have also supported knoxdkm in various ways since we met them at Gatlinburg's Fox & Parrot tavern a few years ago, including a mention in the liner notes of their first studio CD. They now have two full length studio releases and a third on the way.
09.19.2009 Happy International Talk Like a Pirate Day. CD's for New Orleans music charity Pirates for the Preservation of New Orleans Music. Cutthroat Shamrock on 3 of 4 discs. Buy now. http://bit.ly/2n2BZW

Some Great Bands who ( mostly ) sing in Spanish. 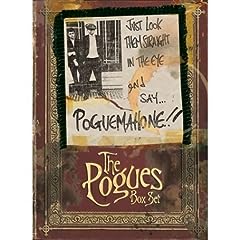 Thank you, Dropkick Murphys.DKM rocked Knoxville tonight. I don't think the show was quite as long as their Boston Saint Patrick's Day shows I have attended, but it was an awesome show and Knoxville was certainly glad to have them. Ken Casey said from the stage that DKM was glad to finally be here, apologized for taking so long, and said that they will definitely be back. Let's hold him to that, Knoxville. While local favorites Cutthroat Shamrock were not on the bill, at least three fifths of Cutthroat Shamrock were present in the audience. Ben was even up front with my oldest nephew, Andrew, who tells me that while he didn't get on stage during the encore, he did " high five " Al Barr and Ken Casey.

To view the rest of my pics from the Knoxville show, click " Photo Gallery " on the right of this page.
Holy Crap !!! DKM are coming to Knoxville !!!

It's about time, too. Dropkick Murphys will be at The Valarium on 11/09/08 for an all ages show.
You can bet I'll be there. If I would travel to Boston twice to see them live, you know I'd travel the 45 minutes from Lenoir City to Knoxville.

Dropkick Murphys come out swinging with their 6th studio album "The Meanest Of Times" a collection of tales about family, loyalty and remembering where you came from. "The Meanest Of Times" contains all the best elements of the DKM sound: a complex distillation of classic punk rock, Celtic folk and American rock'n'roll, this album puts the band's diversity, intensity and sincerity on full display.

From the Quincy Barbershop where it all began to Fenway Park the year the Red Sox won the World Series to six sold out shows in a club they used to be barred from to the title song in a Martin Scorsese feature film the DKM goal has always remained the same. Says Ken Casey: "We always wanted to be that band that didn't forget where it came from and we keep it in the forefront of our minds that we're all in it together, audience and band members, as one, no one better than the other. That's the M.O. of a lot of punk bands, but I think sometimes it gets lost the minute a band has any kind of success. We never want to let it go to our heads. We know how lucky we are to be doing this. It's because of the people that listen to the band's music we have this opportunity to see the world. I don't care if we're playing to 10 people or 10,000 people, those kids that are up front singing our songs are the reason we're doing this."

I've said it before, but it's worth repeating. Please purchase Lafitte's Return Volumes 1 & 2 to support the preservation of New Orleans music.
These CD's are full of great pirate-themed bands and music. My friends in Cutthroat Shamrock have a track on each volume, and the music ranges from metal to traditional sea chanties. Besides just being great CD's, the profit goes to New Orleans school music programs.

here you'll see some of the photos from Boston & the DKM concert we went to on 03/11/04 as well as the charity breakfast on 03/13/04! The show & the breakfast were awesome. I shook Al Barr's hand, & Elizabeth & I had our pictures taken with various band members. ( You'll see after we get the pics developed & scanned, hopefully early next week. ) For now, though, if you look close you'll see us in one of the pics posted from the charity breakfast here. (Hint: Look in the top left corner. Elizabeth was wearing a beige coat. )

THE SHOW-03/11/04 If you were at the Avalon for last year's St. Patrick's Day shows, you may think this impossible, but Dropkick Murphys really outdid themselves this time around. Even last year's show (at least on the night we were there) was not quite as awesome as this year's. ( We never would have thought that they could top last year, though. ) The band played a pretty good mix of older tunes and more recent favorites. While they didn't play any Clash covers at the show we were at, they surprised me by playing The Nips ' Vengeance ' & AC/DC's ' Long Way to the Top, ' both of which were from singles or compilations, as opposed to DKM albums. The show also included ' Good Rats, ' 'The Wild Rover, 'and ' Finnegan's Wake ,' in addition to the usual working class anthems such as ' Worker's Song, ' ' A Few Good Men,' & ' Boys on the Docks,' and of course ' The Dirty Glass ' with Stephanie Dougherty. We left saying it was the best concert we had ever been to.

THE BREAKFAST - We were among the last 50 people to get tickets to the charity breakfast, which benefited The Nick Boynton Diabetes Foundation. We shelled out the $50 for two tickets when they became available, the night before we flew to Boston. We were certainly not disappointed. We knew from the moment the band walked by casually greeting the fans waiting to get in ( outside The Harp on the morning of the 13th ) that this would be a morning to remember. Once we were inside, the band members were just as casual, allowing the fans to take pictures with them, signing various items, etc. The Pogues, one of my personal favourite bands, played over the sound system as we ate breakfast & went around taking pictures of each other with members of the band. Ken Casey joined a Bruins team member onstage to raffle off a variety of Dropkick Murphys & Bruins items, then Dropkick Murphys took the stage and played excellent acoustic versions of ' The Dirty Glass ' with Stephanie D. & another great tune, which if memory serves was ' Boys on the Docks. ' Elizabeth says it was ' Boys on the Docks, ' reminding me that Ken Casey introduced his mother before playing it & stated that the song was about her father, John Kelly. Then Casey dismissed us so that the band could go across the street to the Fleet Center to watch the Bruins defeat the Sabers 3-2.

Check out the video " Coma Girl " from the new Joe Strummer single !!!

Watch their ' Savin Hill ' video on BlankTV( You'll have to scroll down through the other ' S ' bands. )

Listen to the song 'Fighter '

A great record store in my old hometown, Orlando, FL.

( The store I ordered my first DKM from. )

A bumper sticker you can print. A local computer user group that I served on the board of in 2003.

A few minutes ago I learned that Captain Phil Harris ( F/V Cornelia Marie, Discovery Channel's " Deadliest Catch "  ) has died.It is always a shock when someone so tough dies. Knoxdkm sends my condolences to his family and crew. He was my favourite captain on the show, since I first saw the episode " Mortal Men. " Fans like myself will certainly miss him, though his family and crew will miss him more.
Leave your condolences: http://community.discovery.com/eve/forums/a/tpc/f/811101106/m/91319333401 Roast your own coffee !

Click here to see my local and sort of local bands page.

It was going to be a " local bands " page, but I don't get out to shows like I did in my younger days, and these guys are the one local band that I know is worth going to see when I can. If I hear another I'll add them, but for now the page is all about Cutthroat Shamrock. ( Okay I wrote that a long time ago and now I would have to add Jon Worley and his Cornbred Blues Band, along with a handful of bands like The Fox Hunt, Pine Hill Haints, and Jason and the Punknecks
that don't quite fit my definition of local but sometimes play shows here with local bands, so I'll try to add a little on them to the local bands page, but until I do, check them out by clicking their names here. )